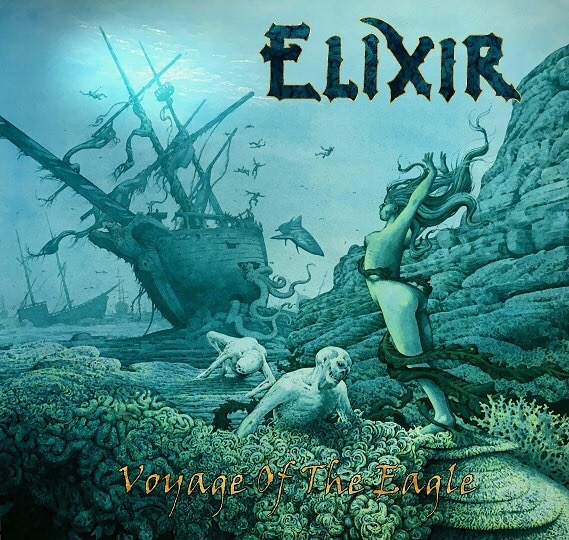 💿 Hi, it’s a pleasure for us to have on Hardrockheavymetal Phil of ELIXIR !! Welcome!!

Thank you very much, it is a pleasure to talk to you!

💿 Can you tell us somethin’about the birth and the name of your band? Which artists or bands impressed you the most as musician in your early times?

Elixir started in a rehearsal room in East London. Dobbs Brothers Kev (bass) and Nigel (drums) and original guitarist Steve Bentley were learning their instruments, saving up their money to buy gear and trying to get a band together playing music in the style that they liked. I suppose it is a similar story all over the world for lots of kids.

Nigel was the youngest at 17, and had just started work. He was saving his wages all the time to buy a new drum or cymbal or stand. Those things are so expensive. When we started he used the battered rehearsal room kit for half of his set-up and added his own bass drum to the house kit to make two, and so on.

In 1983 I moved to East London and started looking to put a band together. I was rehearsing with a band in South London for a while, but it just wasn’t doing it for me, even though we were playing my songs.

Then Kev, Nigel and Steve put an advert in a music paper looking for a lead guitarist, and I noticed that they were local, so I went along for an audition. Although they had two pieces of music, one of which being ‘The Idol’ they had no lyrics. They played through ‘The Idol’ while I watched and I was stunned how tight and powerful they sounded.

They showed me the riffs and we played together. I told them that I could write some lyrics for it. Then I pulled out a folder of some songs that I had written, and we had a run through ‘Devil Rider’ which is quite a simple but rocking song, and I loved the way that they played it.

We seemed to click and I was in the band! We started rehearsing three times per week, writing songs and honing the material. We looked for a singer and found a female vocalist at first, but felt that wasn’t really the sound that we wanted. Around this time, Kev and Steve were trying to choose a name for our band.

They opened a dictionary, closed their eyes and pointed to a word which turned out to be Elixir. Steve was a printer by trade, and designed the logo. After what seemed like ages, we finally found our singer when Paul camera to audition for us in July 1984.

We had kept up the pace writing new material and had just finished ‘Deal With The Devil’, and so we asked Paul to sing that at the audition. He knocked us out with his voice and Kev and I looked at each other and grinned because we knew right away that he was our man.

Not long after Paul joined, Steve disappeared and we never saw him again! After auditioning several guitarists, we chose Norman Gordon, and the “classic” line-up was completed in October 1984.

We were impressed with bands such as Mercyful Fate and Queensryche as they were playing a more progressive kind of rock, and that was where we wanted to take the band in the early days.

💿 Your new album VOYAGE OF THE EAGLE will be out on March 6th (on vinyl on April 17th). Can you tell us somethin'about its composition process and style?

I was at home and started putting together some riffs. Thinking about subject matter for the lyrics, I thought that it might be good to expand on the story of ‘Dead Man’s Gold’ from ‘The Son Of Odin’ album, and make a little pirate adventure.

I had written five songs, which became the first half of the album, but was intended to be an E.P. at the time.

I felt that this material was perfect for Elixir, but we hadn’t played together since 2012.

I reached out to the guys and asked whether they would be interested in recording an E.P. and they all said yes except for Kev.

Kev felt that we had bowed out with a strong album in ‘All Hallow’s Eve’ and should leave things there.

We respect his opinion but the rest of us wanted to do this, and so with Kev’s blessing, we got Luke Fabian in to record the bass. It was Paul that said if we are going to record an E.P. then we may as well make it an album.

Because we all live so far apart from each other these days, I got the material started for another four songs, and when Norms flew over to record sessions for the early songs, he laid down a riff that became ‘Evermore’, the final track.

It was a different process to our other albums where we all contributed ideas from the start. Out of necessity I had to get the ball rolling with ideas, and the other guys all added their input and ideas as we recorded.

Style-wise this album is like a typical mid-70s to early 80s Classic Rock record and was made very much as an LP. This is the kind of album where you can put on the record, crack open a beer, light up a smoke, and read through the lyrics in the gatefold sleeve and let the record take you on an adventure. This is how we used to enjoy albums back then.

Sound-wise, we recorded it like it was made back in 1976. It has that character to the sound, and Nigel put a little nod to Cozy Powell’s ‘Stargazer’ intro on ‘Onward Through The Storm’ and I think we came pretty close to capturing the sound! It won’t suit those who love the modern sound of big compressed drums and guitars in your face at maximum volume, but those who appreciate a bit of light and shade and character to the sound will love it, I am sure.

As will our existing fans who like what we do.

We also have a guest female vocalist, Katie Alys Barton, playing the part of The Siren in ‘The Siren’s Song’.

She is a theatre actress, not a Metal singer, and did a fantastic job. This is another track to just sit back and let the music take you into the story.

💿 There's a great return of format such as vinyl and cassette. What's your thinking about these classic format..love for vintage or is it impossible a future for music outside digital?

I like CDs for the clarity, reliability and convenience. It’s easy to throw a CD in your car stereo or rip it to mp3.

The booklets are a bit small though, and hard sometimes to read all the tiny lyrics. (Our label has included a 24 page illustrated booklet with the new CD, so the lyrics are nicely spread out and legible). Playing vinyl is a treat for me these days.

It’s rare that I can get some time to myself to sit down in my living room, put on a record and study the sleeve like I used to enjoy doing in my younger years.

Then the record crackles, pops or jumps and I remember why I embraced CDs when they first came out!

I cannot believe that cassettes are becoming more popular again!

I mean I loved my portable cassette player when I was a teenager, but the technology is so bad that they should just be confined to history.

Like vinyl, they don’t always play at the correct speed and the tape stretches and breaks and they sound awful. It’s sad to say, but I think that streaming is the way forward as it is better for the environment.

I work at a recycle plant and see the amount of CDs and vinyl records thrown in to landfill every day.

I think that digital will continue to remain the main source of music consumption, but I think it is a shame that downloads come without the whole package of artwork, lyrics etc. where people can get into the whole album experience.

💿 VOYAGE OF THE EAGLE will be out on DISSONANCE and BACK ON BLACK (PLASTIC HEAD Group). Can you tell us somethin'about relationships with them? Are scheduled also any reissue of your previous works?

We signed with Dissonance and Back On Black initially to release our new album. They asked us if they could re-release our back catalogue too, and we agreed. They are planning to follow up our new album with a 4 CD box set of ‘The Son Of Odin’, ‘The Idol’, ‘Mindcreeper’ and ‘All Hallows Eve’ and release those four albums individually on vinyl.

We are focused on the new album at the moment, so we do not have planned dates for these releases yet.

💿 Inside your songs what’s the role of lyrics in the composition process? Words follow music or vice versa?

It depends on the song. Sometimes we have a title, or line or chorus idea of lyrics and put music to that, but most times I would say that the music comes first.

💿 Can you tell us somethin'about your next live shows?

Our next live shows are mostly festival appearances, such as Burr Fest in London, Keep It True in Germany, Into Battle Festival in Greece and Bro Fest in the UK. We are travelling by road to Keep It True and have a couple of club dates to play in Belgium on the way there and back.

8. 34 years after masterpiece THE SON OD ODIN and you’re here..ALIVE AND KICKIN! How important that album was for you?

It was important for us to get an album out, as that was the next logical step for the band. We asked a lot of labels to release it but they weren’t interested, so we put out 2000 copies on our own label in the end. It did OK for us until we split in 1989.

It was in 2001, when a Greek label asked to release it on CD, that we discovered that it had become a cult album over the past 15 years! It was voted one of the “Top 20 Power Metal

Of All Time”, alongside Judas Priest and Helloween in UK Terrorizor Magazine in 2005, and again voted “One Of The 25 Greatest Power Metal Albums” by Metal Hammer in November 2019.

💿 Amazing cover for VOYAGE OF THE EAGLE? Can you tell us somethin'about?

It was created by Duncan Storr, who not only did the cover but also the illustrations inside the lyric booklet for each song. Duncan had done a fantastic job with our ‘All Hallow’s Eve’ cover, and so we approached him again for this album.

He doesn’t automatically agree to do the work though. He likes to listen to the material to get inspiration from the songs.

If he likes what he hears, then he agrees to do the work.

I sent him a key track, ‘The Siren’s Song’ and asked him to base it on that. However, when the draft artwork came back the ship had sunk, not sailed away as in the song!

However, we loved what he had done, and still had the final track of the album to write, and so we based the lyrics upon the cover artwork. So in the end, the artwork inspired our final track, instead of our song inspiring the artwork!

💿 Thank you so much for your time! See you soon on Hardrockheavymetal!

Thank you very much for talking to me.

VICIOUS RUMORS - SOLDIERS OF THE NIGHT