💿 Hi, it’s a pleasure for us to have on Hardrockheavymetal.. AIRFORCE..Welcome!!

Thank you, its our pleasure to undertake this interview for you

💿 On Sept 4th, 2020, will be out your new full-length entitled STRIKE HARD , positive received on our pages. Can you tell us something about its composition process and style?

We have 3 very special guests joining us for various songs on this Album, Paul Dianno, Ivan Giannini and Zal Cleminson.

3. Son of the Damned

These are new versions with Lino as vocalist.

“The Reaper” features a guest appearance from Ivan Giannini sharing the vocals with Lino.

“Don’t Look in Her Eyes” is a reworking of and old EL-34 song features a guest appearance from the Beast, Paul Dianno sharing the vocals with Lino

EL-34 were the Band Chop and Tony had before Doug joined and changed to Airforce.

“War Games” is a new version of the song that kicked off the Airforce reformation, originally released on the Maiden themed compilation Album “Origins of Iron”.

We recorded with our very good long term friend Pete Franklin as Engineer at his Studios in East London.

Pete Franklin is lead vocalist and guitarist in his own metal band CHARIOT.

💿 In your early times as musicians which artists or bands influenced you the most?

Our main influences would be, Black Sabbath, Judas Priest, Accept, UFO, Iron Maiden, to name but a few.

💿 How is difficult promote a new work after the lockdown drama? Do you believe can you return soon on stage?

It is difficult due to the Virus Pandemic and live music has ceased for the time being.

Fortunately, we had our new Airforce Album “Strike Hard” just about complete by the beginning of Lockdown.

Airforce have had to postpone our April 2020 US tour.

We had UK shows planned that were cancelled along with an appearance at the German “Headbangers Open Air” Festival and a Festival in Malta to name but a few.

Hopefully all will be rescheduled for 2021 but who knows for sure when Live music will return.

💿Here at HARDROCKHEAVYMETAL we are strong defender of classic format, a love for vintage or isn't there a future outside digital?

There will always be a place for the vintage style, be it Vinyl, Cassette or CD.

A lot of people still want to have a physical object to own and to hold. Digital is the tech of now, who knows what the future holds. Who would have foreseen our digital world of today 30 years ago? 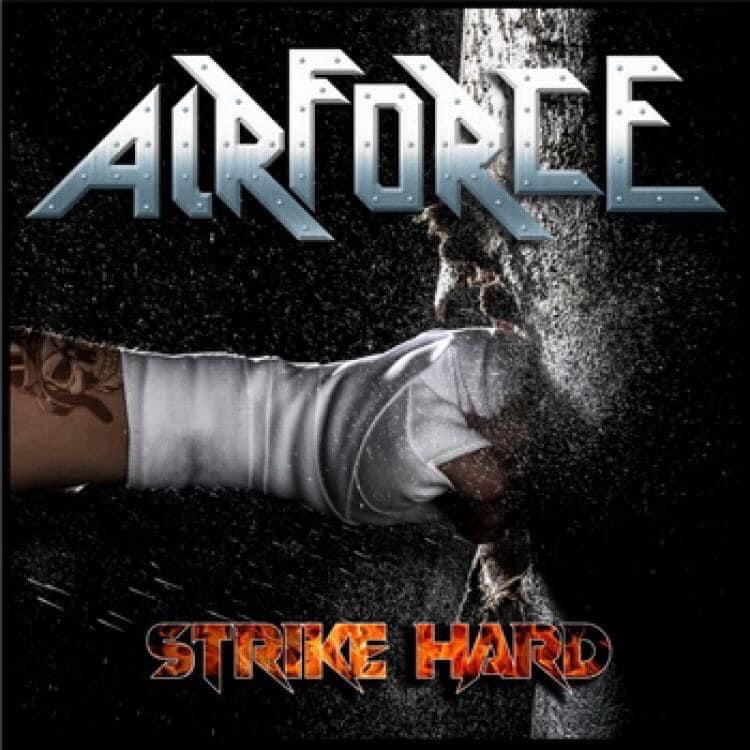 💿 Can you tell us something about the great cover of the new album?

Sally suddenly came up with her work of art for the cover of “Strike Hard”, thank you Sally.

💿 You shared stage with several artists and bands, who's the craziest?

Probably “Gang”, The “Architects of Chaos” (alas now no more) were a great bunch who we played with at BURRfest 2 in London, March 2018.

Dom has become a great friend of Airforce and especially Tony Hatton.

Tony and Dom have had quite a few drinking sessions /competitions together.

💿 Thank you so much for your time! See you soon on Hardrockheavymetal, hoping to see you also on the stage as soon as possible.

Cheers and thanks for having us.